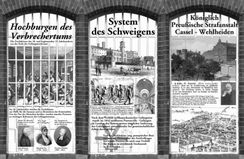 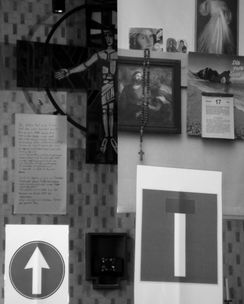 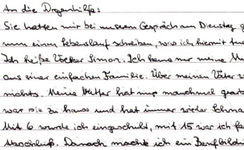 Life “behind bars” is the theme of an exhibition that is being shown in an inner-city church in Kassel/Germany from April 29th to July 31st 2010. A group of Christian volunteer prison visitors has organized the show which will also include church services, lectures and discussions on various topics connected with the penal system. One spectacular exhibit under the organ loft is a full size reproduction of a 100-square-foot prison cell, including bed, washbasin, toilet and cupboard. The television set shows original pictures and sounds from the state prison in Kassel.

The exhibition, which has been sponsored by the regional Protestant Church and the Roman Catholic diocese, is intended to raise awareness for the situation of convicts before, during and after their prison sentence. On tables taken from a prison in the town that was recently closed visitors can study fictitious, but realistic “personal files” with short biographies, official correspondence, assessments and other documents describing the background and development of a criminal “career”.

Crime and punishment are continuously present in the press and the mass media, yet there is practically no information about everyday life in the prisons. The organizers of the exhibition have designed 24 banners to hang in the side aisles of the church. The pictures and texts start with the history of the penal system in previous centuries and go on to describe what occupies present day inmates: the daily timetable, work in the carpentry and metalwork shops, school classes and sport groups, meals, visitors and post. The role of the warders, the reactions of the victims of crime and the prisoners’ reintegration into society after serving sentence are further topics covered in the exhibition.

After the official inauguration on April 29th the exhibition in the St. Elisabeth Catholic Church (Friedrichsplatz 13) will be open to the public from 12.30 to 4.30 p.m. every day except Sundays and Mondays. Entrance is free.